Southend Church Bedford and the Bousfields 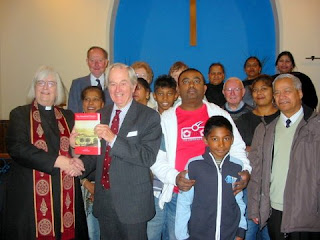 By coincidence, within two months of BHRS's launch of the Bousfield Diaries, the church which was the centre of the Bousfields' religious life celebrated its one hundred and thirty fourth anniversary.

In November 1873, a new Methodist church was founded in the district of Bedford known as Southend. One of the founders, Charlotte Bousfield, kept a diary of her life, in which her ‘little chapel’, as she called it, played an important part. The church was founded as a memorial to Charlotte’s last child, a daughter always known as ‘Edris’, who died in 1872 at the age of three. She lies in Bedford Cemetery, and a photograph of the gravestone, which had been hidden for many years under a large tree just by the main entrance to the Chapel there, appears in the Diaries.
Last Sunday (18 November) the anniversary of the foundation was celebrated by the Minister and congregation as it has been every year since 1873. The editor of the Diaries, Richard Smart, attended the service and presented a copy to the Minister, Revd Rachel Larkinson and congregation.
Posted by Barbara at 16:35