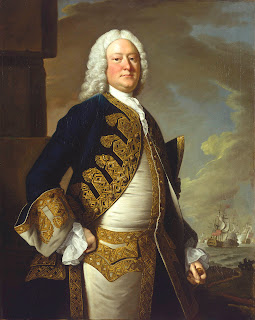 The Byng family was prominent in Bedfordshire in the 17th and 18th centuries. After a successful naval and political career, George Byng was created Viscount Torrington in 1721. His son, Pattee Byng, was MP for Bedfordshire until he succeeded his father in 1733. The family had strong naval connections, the best known being John Byng, a younger son of the first Viscount, who rose to become an Admiral.

Admiral Byng was charged with neglecting his duty during an action against the French fleet in the Mediterranean in summer 1756. At a court martial he was found guilty and sentenced to death. Pleas for mercy were unsuccessful and he was executed by firing squad on board his former ship, the Monarch, on 14 March 1757.

The story is simply told on the Royal Naval Museum website http://www.royalnavalmuseum.org/info_sheets_john_byng.htm and on the National Maritime Museum site http://www.nmm.ac.uk/collections/explore/object.cfm?ID=BHC0380 where there are also some excellent portraits of Byng and a painting of his execution.

His execution has long been controversial and a group at Southill in Bedfordshire where the Byng family lived is campaigning for his pardon. Despite a set back last year on the two hundred and fiftieth anniversary of his death when the MoD told a descendant that a pardon after so long was inappropriate, the campaign continues, with several local initiatives -