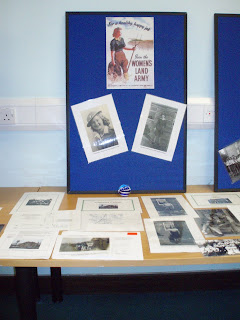 “We would not have missed it for the World”:
the Women’s Land Army in Bedfordshire 1939-1950
And what a launch it was! More than fifty former land girls (sporting their new WLA badges) and their families (including a couple from the USA) were amongst the audience viewing the display of information about their work and helping to launch the book. The event room overflowed and buzzed with conversation. Anglia TV took pictures and interviewed some people.

Book launches are about speeches to celebrate the successful completion of a lot of hard work by a lot of people. In this case, there was a double celebration because this was the book of the award-winning website.

Nicola Avery of Bedford Library’s Information Services welcomed everyone and explained the library’s involvement with Stuart Antrobus’s WLA research. She was presented by a trustee of the Library Services Trust with the Alan Ball Local History Award which is an annual award for local studies publishing by public libraries (see my blog earlier this year). The award was accompanied by certificates for the site’s webmaster and for the author. The book's publisher, Paul Bowes of Book Castle Publishing, praised everyone involved in its design and production, which was well-deserved as a great deal of care has gone into presenting information and illustrations in an attractive and clear fashion.

Finally, Stuart thanked all the former land girls who had contributed so much to the project and his team who helped compile the list of c3,500 names from WLA records. He has been working on the project for five years and is continuing to research the people and places. 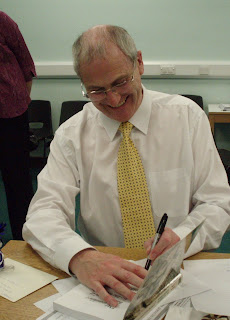 And the book itself? It begins with a straightforward and brief account of the Women’s Land Army, nationally and locally. At this point it is worth noting that the book is about land girls who WORKED in Bedfordshire, not Bedfordshire born and bred land girls who were sent out of the county to work – that’s a different project!

The book ends with a superbly reconstructed list of the land girls who worked in Bedfordshire (the website contains information on some of them), the hostels they lived in and other useful facts on the WLA and farming jobs. The middle section of the book tells the story of some of these girls and what the work and the conditions were like. It brings home how different life was then, especially in comparison with the technology and convenience of the early 21st century. This is an essential reference work for anyone interested in women’s war work or the home front in Bedfordshire in WWII and it has the advantage of being updated through the website.