Anne Allsopp's new History of Luton (see below for publication details) is particularly strong on the town's recent history over the last 100 to 150 years, although in traditional style it begins with early habitation. 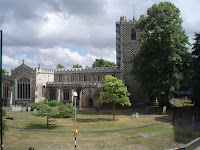 After opening chapters on the early history of the town, where incidentally the author makes the point several times that little of the early town survives to be seen above ground or in the archaeological record (the exception being the parish church, shown here), she focuses on the themes that contributed to modern day Luton with chapters on country houses, education, industry, wartime, migration, leisure and the town. Under these headings she has woven together hundreds of strands including


.... and the list could go....   The book is a treasure house of information about Luton's past, often in the words of people who were there, and supplemented by wonderful photographs and maps.
This is a book for locals, who will revel in the memories of how Luton was - and is.  For others who are curious about the towns and cities of this country, this book is more than just a history of Luton, it is also a record of how people worked and lived in a time not long gone.
Anne Allsopp A History of Luton from Conquerors to Carnival.  Andover, Phillimore, 2010. ISBN 978-1-86077-621-2  £20