An account of prisoners of war in Bedfordshire during the Second World War has been long overdue.
Stephen Risby has blended both military and social history to produce an excellent history of the subject*, which answers the questions: why were they here, what did they do, what were the problems and how were they perceived locally? 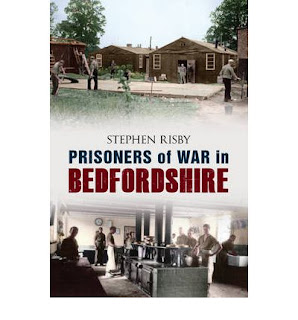 To answer these, the author has carried out extensive documentary research, as well as drawing on the Mid-Bedfordshire oral history research, “Changing Landscapes, Changing Lives”, to bring to life the experiences of both prisoners of war [POWs] and the civilian population who had contact with them.

There are chapters dealing with the various POW camps and hostels in Bedfordshire, what camp life was like and the public attitudes to both German and Italian POWs. There is also a chapter devoted to the unfortunate ‘Tilbrook Incident’ in which an Italian prisoner of war killed his English working party guard and was himself shot by a member of the Home Guard. This extremely atypical event gained national notoriety and the soldier was awarded the British Empire Medal.

What is particularly good about Stephen Risby’s book is the careful way he gives the historical background to the presence of prisoners of war in this country. In particular he explores the distinct national stereotypes of German and Italian soldiers, as perceived by the British government and members of the public, which affected the different ways in which German and Italian POWs, always kept separate, were regarded, employed as a labour force and held with varying degrees of security.

There are useful endnotes on sources (but no page references) and a helpful bibliography but no index. Finally, there are five appendices of transcribed documents which illuminate the topics of the treatment of prisoners, what constituted a POW establishment, an International Red Cross committee report on the Ducks Cross POW camp, instructions on camp maintenance and an end-of–the-war official visitor’s report on the Colmworth and Ducks Cross camps and various other hostels around the county. This well-illustrated paperback is very readable and informative.


Contributed by Stuart Antrobus
Posted by Barbara at 17:36